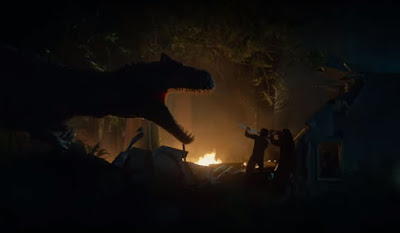 Universal Studios is hoping to widen their robust revival of the Jurassic Park brand into something not quite a "cinematic universe" but definitely a "mythos."

Battle at Big Rock is an eight-and-a-half-minute Jurassic World sequel that dropped this week for free on YouTube to drum up interest in the upcoming sequel. But it's a proper chapter in the series. In nerd terms, it's canon. Directed and written by the real deal Franchise Architect ™ himself.

Sure, you're thinking. Whatever, this franchise is just 'Transformers with dinosaurs' at this point, isn't it? Well, your mileage may vary. The new dinosaur movies have been quite popular for Universal, a much better investment than their monster movie reboots of late. And this short shows a lot of promise for how the brand can now evolve from a nostalgia-driven grilled cheese special to something more serial and reliable in nature, a kind of Planet of the Apes direction.

Colin Trevorrow seems eager to get back to basics after having lapped Josh Trank in bad press, Star Wars firings, and big personal films belly-flopping. This short is basic, but in a practiced, pleasing way. While Jurassic World seemed overstuffed with crowd-pleasing choices--sort of a game of wouldn't it be cool if this happened that carries us to the final action scene--the challenge for this miniature entry seems to be efficiency of storytelling. We don't have time for exposition, we don't have time for complicated dinosaur characters with backstories and relationships. We don't have time for "remember when." We've got just enough time to introduce reality, disrupt it, unveil the consequences, and resolve them.

We do get humans, in the form of "Castle Rock" star Andre Holland and Natalie Martinez as parents trying to make things work on an RV camping trip. Holland is great with kid actors. He captures that very real "I'm talking to a child" facade that many adults put on. It's a projection of confidence in the face of horror. Sam Neill had that same exact chemistry with his on-screen charges in the original Jurassic Park. There isn't much dialogue once the dinosaurs inevitably start wrecking stuff, but Martinez does a lot with what she gets, as does the most prominent of the precocious children, Melody Hurd.

In terms of novelty, you can't beat a Jurassic World movie that cuts out most of the geneticist-supervillain plots and just lets some big dinosaurs fight for a few minutes. Here we've got an Allosaurus attacking a pair of Nasutoceratops as the main action, and because of the campfire lighting motif, there's a level of dramatic flair to it. CGI dinosaurs are never going to look fantastic, and while I understand the practicality of them, it's probably for the best that they be veiled in shadow. The more effective way to cover the so-so effects takes place during the credits, when similar wild dinosaur interactions across the globe are filmed impromptu on handheld devices. This is where the potential for the future of the series really leans hard, with normal Western Hemisphere living interrupted in increasingly terrifying ways by our new forced coexistence with dinosaurs. Somehow I doubt how committed to this angle Trevorrow and company are. I'd bet dollars to doughnuts the next Jurassic World is in some isolated locale like a bunker, or a nature preserve, or a station in Antarctica. It's neat to think of, though, and it's a neat tease for whatever does end up on the big screen.

If these short chapters of big tentpole franchises are the future of marketing for a big films, I like the idea. Perhaps next time Jurassic World III screenwriter and short film director Emily Carmichael could get to direct the next one? Or franchise star and "Mandalorian" episode director Bryce Dallas Howard? Between a complete and satisfying individual story like this and an extended trailer that gives away too much of the movie, I like these.

This review is part of Kyle's Letterboxd page, follow him there for reviews not posted here on the site, including rankings and movie lists.